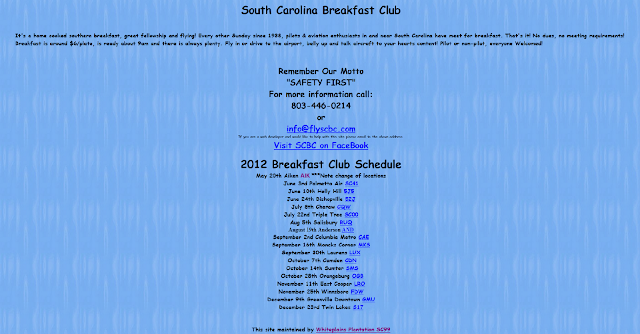 On Sunday, Aug. 5, the world’s oldest continually active flying club will make its only annual trip out of South Carolina to the Rowan County Airport (RUQ) in Salisbury, NC.
“EAA Chapter 1083 has been honored to have hosted this prestigious group of aviators for the past 12 years,” noted Jack Neubacher.

The South Carolina Breakfast Club, led by President Gerald Ballard, has been visiting airports around South Carolina and a few surrounding states every other Sunday since 1938, missing only events during World War II when fuel was not available. This is a club that has no dues — you join by attending your first meeting, officials said, adding “the only rule is to fly safe.”
Aircraft will start arriving at about 8 a.m. and breakfast will be served from 8:30 until everyone goes home. The “official meeting,” which includes awards and sharing past and future stories, gets underway about 10 a.m. and by 11 a.m. all but the most dedicated hangar fliers will be on their way down the taxiway for takeoff.

In the past, depending on weather, we have more than 100 airplanes, plus a large contingent of drive-in visitors,  joining us for this annual breakfast event, Neubacher noted.