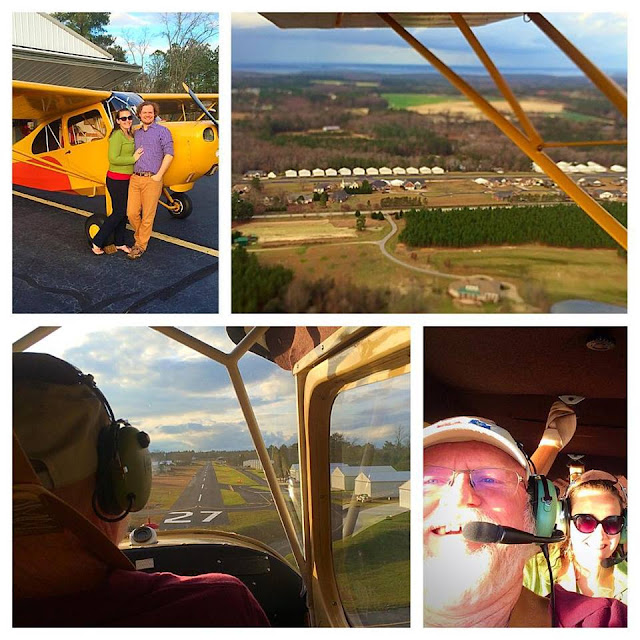 You wouldn't know that this was taken at the end of 2015. Got up to 75 today.  It was a great day for Mike Moore had a fun #flight riding #tandem. #champ #funwiththeinlaws #whiteplains — with Stuart J. Moore and Mike N Jean Moore at White Plains Plantation.
Posted by Contact Information at 12/27/2015 06:13:00 PM No comments:

The performance of Klaus Savier’s airplane would seem bogus if it wasn’t so thoroughly documented.
The German-born engineer, record-setting pilot, and founder of Light Speed Engineering, a California firm that specializes in aircraft electronic ignition systems, is compulsive about record keeping. And he’s reluctant to talk about the performance of his personal airplane and technology test bed, a Rutan-designed Long EZ powered by a parallel-valve Lycoming IO-360 engine.
“It’s easy to throw around all sorts of numbers—but I’d rather just show you so you can see for yourself,” he said outside his hangar/office at Santa Paula Airport. “You want to go flying?”
That afternoon I hopped into the back seat of Savier’s airplane and took lots of notes as we climbed to 10,500 feet over the Pacific.
Savier kept the throttle wide open as we climbed at 150 knots indicated airspeed at a rate of 1,500 feet per minute. Instead of monitoring the exhaust gas temperatures, he leaned the fuel/air mixture according to a “Lambda gauge,” a high-performance automotive instrument.

Light Speed Engineering's Klaus Savier stands next to his Lycoming IO-360-equipped Long EZ. Photo by Dave Hirschman.
“The automotive world has known the exact ratios for peak power and peak efficiency, and the numbers are pretty much the same for aircraft engines,” he said. “I bought the gauge for $350 at an auto parts store and it tells me exactly how to lean at any altitude. I don’t even pay attention to EGT anymore.”
We leveled off at 10,500 feet (11,600 density altitude) and Savier clicked on the autopilot and let the airplane accelerate at full power. It stabilized at 190 knots indicated airspeed (234 knots true) with the fixed-pitch propeller turning 2,680 rpm and the engine consuming 11.5 gph rich of peak.
“Now, watch what happens when I go lean of peak,” he said.
Savier pulled on the mixture knob and the EGTs momentarily peaked, then steadily decreased. The engine with dual electronic ignition and a highly sophisticated fuel injection system continued to operate smoothly.
Indicated airspeed slowed 10 knots to 180 knots (208 knots true) while fuel flow plummeted to 7.6 gph (and engine rpm fell to 2,500). That’s a 5.26-percent speed reduction and a 34-percent drop in fuel consumption.
“Everything gets better lean of peak,” Savier said. “Fuel burn, range, CHT, and EGT.”
The hottest cylinder was just 320 degrees, and all EGTs were below 1,300 degrees.
To emphasize his point, Savier pulled back even further on the mixture knob.
Airspeed fell to 143 knots indicated (175 knots true) while fuel consumption fell all the way to 4.8 gph. In driving terms, that’s an astounding 42 (statute) miles per gallon at 201 (statute) miles an hour. Put another way, Savier cruises as fast as an Indy car while burning as much fuel as a Prius.

Light Speed Engineering's Klaus Savier has coaxed Toyota Prius-like fuel consumption from his Lycoming IO-360-equipped Long EZ while posting Indy car speeds. Photo by Dave Hirschman.
When flying with oxygen at higher altitudes, Savier’s airplane is even more impressive. Take a close look at the photo (left) and you’ll see the Long EZ at an altitude of 17,500 feet is traveling 224 knots true while burning just 7.3 gph.
In car terms, that’s 257 miles an hour, faster than any NASCAR racer goes, at 35.3 mpg.
All this hints at the kinds of efficiency gains available to a broad cross-section of general aviation when innovation-stifling regulations eventually are lifted as part of the highly anticipated FAA Part 23 rewrite. Dual electronic ignition and computerized fuel injection are just the low-hanging fruit in that exercise.
Savier is tinkering with other engine technologies that promise even more gains—but none of those developmental projects were part of this flight.
Yet if I hadn’t seen it, I wouldn’t believe such speed and efficiency improvements were even possible.