Please plan to attend the July pilot's association meeting. Mike Flack, Director of the Columbia Airport will provide a short presentation and Q&A. We will have a cash drawing, Door prizes, Food and Fellowship.
Posted by Contact Information at 6/27/2006 05:16:00 PM No comments:

There will be a meeting of the Whiteplains Plantation Asociation Board of Directors and Leadership Team on Thursday, June 29, at 7 PM, in Ken Plesser's hangar (393 Whiteplains Place).

Board members, officers, coordinators and committee heads are expected to attend or to send an alternate. Any Whiteplains property owner is welcome (and encouraged) to attend as well. 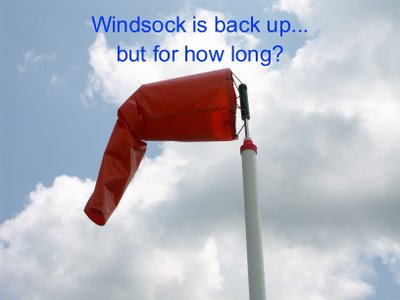 The windsock is back up. Not sure how long it's going to stay. We may need a better base. 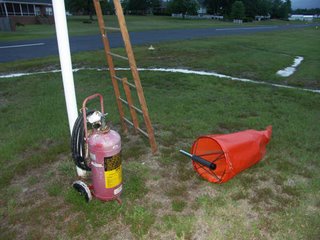 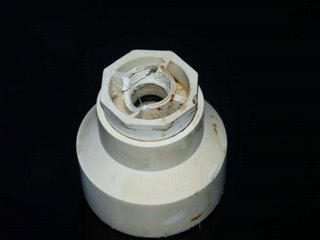 Today after a strong

wind, the main windsock blew down after the plastic base failed. See enclosed pictures. I hope to have it back in service by tomorrow. 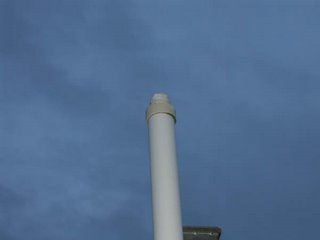 Gilbert has a new restaurant- ANGELO'S Greek and Italian Restaurant. It is located 1 block west of Peach Festival Rd. on the north side of Hwy 1. (where Rene's used to be but different people). Nancy and I did a test run on the food and pricing. Good value, good food, very small inside.

One of the goals of this year’s Board has been to create more community involvement, therefore we developed an organization that we believe will encourage more participation.

The Architectural Review Board is mandated by the Covenants, Conditions and Restrictions (a legally-binding document, by the way). Its members are appointed by the Developer until such time as the Developer transfers control of the ARB function to the Association. This transfer took place for Phase I a while back, hence the Board was able to appoint Dennis Ramsey (chair), Cindy Ross and Bob Chatham to the Phase I ARB. At the start of this year, the transfer has not yet taken place for Phase II, so Jim Wheat continued to chair the Phase II ARB. Last month, the developer transferred Phase II ARB responsibilities to the Association. Jim then joined the unified ARB as a fourth member, and Dennis Ramsey’s team is now responsible for both Phase I and Phase II.

A few years back, the Board created the position of Airport Operations Manager to facilitate the many daily functions that are needed to keep the place up-and-running. Over time, this volunteer position (filled by Lee Van Wormer) expanded to a scope that was well beyond the capability of any one person. In order to provide additional support for our rapidly-growing community, this year’s Board created three new volunteer positions in its place: Aviation Operations Coordinator, Residential Operations Coordinator and Communications Coordinator. The jobs were first filled by Jim Causey, Bill Como and Nancy Van Wormer, respectively. Their tasks, in brief, are to recruit and coordinate the efforts of residents to accomplish the work that needs to be done, and to report status back to the Board/officers. Jim has since turned the Aviation job over to Don Cook.

The five Board members, plus the ARB Chair, Pilot’s Association President and the three Coordinators, constitute the Whiteplains Leadership Team. Their meetings have been, and will continue to be, announced to everyone by e-mail, and any property owner is welcome to attend.

Whiteplains UNICOM #3: Organization – Board and Officers

There has been some confusion about the roles of the Board of Directors and the Association Officers. This UNICOM is intended to help to clarify any misunderstandings.

The Whiteplains Plantation Association (that’s the full proper legal name) is organized much like a large corporation. It has a Board of Directors (no less than three members and no more than five) that is elected by the shareholders (i.e., all property owners, both hangars and residences) to a two year term. It also has a set of operating officers that is chosen by the Board. In December of last year, you elected, in alphabetical order, Michael Cone, Micah Froese, Lloyd Krueger, Ken Plesser and Terry Yon. The Board elected Ken Plesser as its Chairman.

The first order of business for the Board was to elect the operating officers. Four officers are required; others are optional. The officers need not be members of the Board; in fact, they need not even be property owners. In recent years, however, the Board has chosen to appoint the officers from among themselves in order to eliminate any potential confusion about who is in charge. The Board selected Ken Plesser as President, Micah Froese as Vice-president, Michael Cone as Secretary, and Terry Yon as Treasurer.

Unfortunately, in April, due to aspects of his personal life that required special attention, Michael Cone found it necessary to resign his positions. This left two different vacancies: a seat on the Board, and the officer function of Secretary. At a meeting last month, the Board decided to appoint Joanne Kiesler as Secretary and to leave the Board position vacant. This means that we would carry on with four Board members for the remainder of the year.

Why leave a vacancy? Our By-laws require that we elect at least two new Directors each year but, historically, this has not been the habit… instead, we have elected a full slate of five each year. In order to do things ‘by the book’ in 2007, we would need to solicit two resignations from among sitting Board members (all of whom have just been elected to two-year terms). So, rather than create a new (unelected) incumbent, we chose to leave the seat empty until the next election.

In the next Unicom, we’ll talk about volunteer positions. 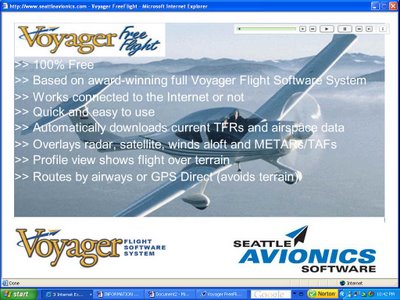 I wanted to share some neat Flight Planning software that I found on the internet. Can be used for VFR and IFR flights. It is called, "Voyager Free Flight". The basic package is free, and additional modules can be purchased.

Check it out at: http://www.seattleavionics.com/Voyager/Tours.htm 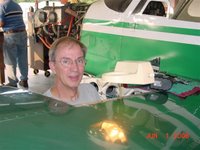 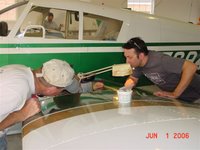 Lee Van Wormers annual on his Piper is moving along. At the moment they are waiting for parts.
Nancy sent some pictures that we wanted to share with everyone.

Nancy wrote: "It is incredible how many hours our dear neighbors have devoted to giving 94W the BEST annual ever. I honestly think it has been fun for everyone and we certainly have enjoyed the company in the hangar. We will forever be grateful for all the hard work and long hours. 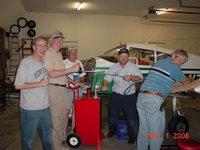 Lee had a very good day today which was wonderful as yesterday was a hard one. One day at a time seems the only way to deal with this. 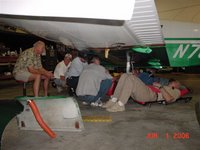