SUPERSONIC JETS ARE BACK!

Breakfast in New York, lunch in London, once again becomes a reality.

Traveling twice the speed of sound, these high-speed beauties can cross theAtlantic ocean in only three hours.

It’s been more than ten years since British Airways retired the last Aérospatiale-BAC Concorde airliner, which travelled at more than twice the speed of sound.

Since then we have been limited to traditional commercial long-haul jets with a cruise speed of 500 to 600 mph.

But There’s a new generation of supersonic passenger aircraft beginning to emerge
boasting speeds at least twice as fast as current commercial planes.
In Europe jets are allowed to fly at supersonic speeds over land, but the US prohibits civilian planes from breaking the sound barrier, about 750 mph, while flying over land to avoid noisy sonic booms. The new breed of supersonic transports will fly at subsonic speeds until they reach the ocean when they will speed up to over 1,200 mph.

The jets, which are designed for trans-continental flight will be made mostly from carbon fibre composite material. Design features include wings which reduce overall drag by 20 per cent providing lower fuel consumption and longer range for passengers.

While these planes will first appear in the private and business jet market, catering only to the super rich. With price tags of over $100 million, few of us are running to the jet store, but it won’t be long until you see the new breed of planes taxiing down a runway headed for your gate.
WATCH VIDEO OF AMAZING DIGITAL WINDOW TECHNOLOGY
Click here for video:
Posted by Contact Information at 11/30/2014 05:46:00 PM No comments:

Enlarge Photo
The FAA has launched Phase I testing of four unleaded aviation fuels at its William J. Hughes Technical Center in Atlantic City, New Jersey, officially beginning aviation's much heralded transition away from low lead avgas.
Two fuels developed by Swift Fuels and one fuel each developed by Shell and Total are now undergoing laboratory and rig testing, which is expected to continue for the next year as the FAA seeks to start phasing out 100LL avgas as early as 2018.
The potential replacement fuels were submitted for testing under the Piston Aviation Fuels Initiative (PAFI), a joint industry-government effort to facilitate the development and deployment of a new unleaded avgas that will meet the needs of the existing piston-engine aircraft fleet, totaling around 167,000 airplanes. The PAFI steering group consists of the FAA, AOPA, the American Petroleum Institute, the Experimental Aircraft Association, the General Aviation Manufacturers Association, the National Air Transportation Association, and the National Business

Aviation Association.
The tests underway now seek to determine whether the unleaded replacement fuels are compatible with aircraft systems such as fuel bladders, hoses, pumps, gauges and more. Two or three of the candidate fuels will be selected for Phase II testing, which will involve flight trials of the unleaded fuels, including flying with mixtures of 100LL and unleaded avgas.
The two-phase test program is being funded with about $6 million per year earmarked by Congress.
Get exclusive online content like this delivered straight to your inbox by signing up for our free enewsletter.
We welcome your comments on flyingmag.com. In order to maintain a respectful environment, we ask that all comments be on-topic, respectful and spam-free. All comments made here are public and may be republished by Flying.

Read more at http://www.flyingmag.com/news/faa-testing-100ll-replacement-fuels-begins#fbzTf6ZkKJudLiaP.99
Posted by Contact Information at 11/26/2014 09:55:00 PM No comments:

Ever here of a Pack Plane? 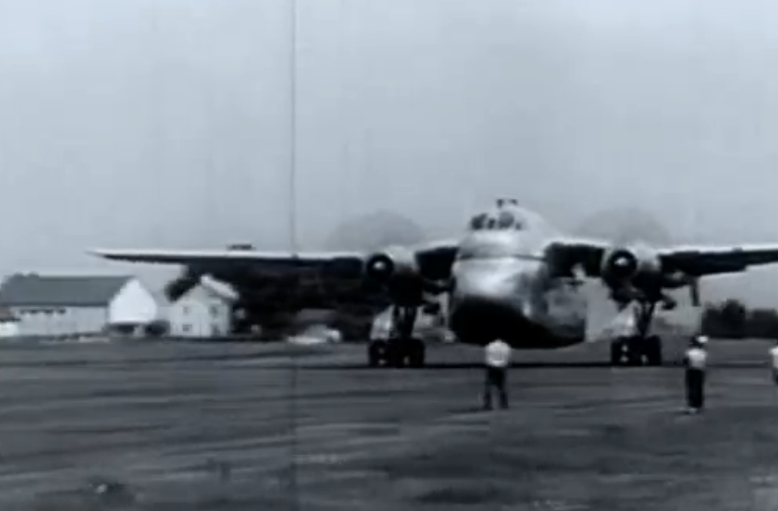 Don't let being blind stop you from flying.

Check out a net tool for Weather Avoidance

at the Aviation Weather Center on aviationweather.gov, you owe it to yourself to have a look.
Representatives from Jeppesen provided a great overview of the FPT at the recent Flying Aviation Expo in Palm Springs, California, during a series of well-attended IFR pilot proficiency seminars.
The Java-based tool brings together all of the weather products available on the Aviation Weather Center website into one graphical interface that lets pilots input their route of flight to see potential hazards along the way, including icing, turbulence, ceilings, visibility, winds, convective activity and more.
The 3D data

can be sliced horizontally at selected flight levels or vertically along your route of flight. All the data can also be animated in a time lapse to highlight changing conditions.
To use the tool, visit aviationweather.gov/flightpath and click the software launch icon to start the java applet.

Read more at http://www.flyingmag.com/technique/tip-week/new-tools-weather-avoidance#Bglxmh1rf3Fl0KaM.99
Posted by Contact Information at 11/11/2014 09:54:00 PM No comments: 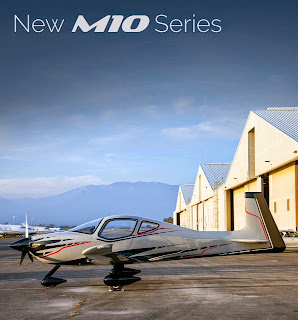 CHINO, CA November 11, 2014­ Mooney International introduced the first new
Mooney models since the restructuring of the company at the Airshow China
2014 in Zhuhai, China. The Mooney M10T and the M10J fill a need and
reflect innovation at a different level of the fleet mix and these
aircraft will provide a steppingstone to the high performance M20 series.
The M10T is a modern fixed gear composite trainer equipped with
Continental¹s CD-135 Diesel engine to train new pilots for the Technically
Advanced Aircraft (TAA) that they will be flying in the future. The M10J
will provide an upgrade from the M10T airframe with more luxury and
amenities for the owner pilot. In addition, the M10J will be equipped with
the CD-155 Diesel engine. The M10T and M10J engines have leading turbo
diesel technology, low operating costs, and provide pilots a fueling
option of diesel or jet fuel. These two aircraft will provide the general
aviation market with a modern aircraft, not only for the mature western
aviation market, but also for the fast growing Chinese market. The M10
series is expected to gain certification and begin deliveries in 2017.

The M10T will fill the need for a new trainer option for new pilots and
flight schools everywhere so pilots can seamlessly move onto Mooney¹s M20
series. The M10J, displayed as a full-scale mock-up at the show, is a
retractable gear, diesel-powered aircraft. The M10J performance goals
include cruise speeds greater than 170 ktas and a range of more than 1,000
nm while maintaining a competitive market price. The ³J² designation
alludes to the well-regarded and highly popular M20J also known as the
Mooney 201. The M20J is regarded amongst the most fuel-efficient single
engine aircraft in its category and has been featured as a leader in
efficiency throughout the aviation news industry since its initial release
in the 1970s.

³We designed the all new M10J model with longtime Mooney fans in mind. The
M20J helped change general aviation by making flying practical to more
people across the U.S. Now, the M10J promises to do the same for the
world. Not just in the U.S., but also in China as its general aviation
industry quickly develops,² said Dr. Jerry Chen, Mooney CEO.

At Mooney¹s unveiling ceremony in Zhuhai Dr. Chen said, ³I am very excited
to officially present the new M10 series of Mooney aircraft for Training
and Performance. These aircraft mark a new beginning for Mooney and are an
indication of great product innovation coupled with Mooney¹s long line of
history making aircraft.²

Mooney International is an iconic American brand with more than an 80-year
history of producing the best-in-class aircraft. Mooney¹s reign and focus
on speed has converged with safety and style to bolster our unique
aircraft manufacturing and engineering approach that have made our
aircraft legends. Mooneys are single-engine, piston powered aircraft that
hold more than 130 world speed and altitude records with a fleet that has
accumulated over 40 million flight hours, as well as an impressive safety
record. Mooney has offices in Kerrville, TX, Chino, CA, and Beijing,
China.

Corvair College - Build your own Corvair Engine for your plane.

Thinking of building a Corvair Engine for a plane?  Then check out the video below.

FAAST Blast — Week of Nov 03 – 09, 2014 Biweekly FAA Safety Briefing News Update   Get It Straight: Got WX? Campaign Focuses on Crosswind Landings            The Got Weather? campaign aims to help general aviation pilots prepare for potential weather challenges they may encounter during the 2014 flying season. For November, the campaign is focused on crosswinds. Check out a new video featuring FAA Administrator Michael Huerta discussing crosswinds with pilot Ty Chaudhry. There is also an assortment of helpful resources available on FAA’s Got WX web page at: www.faa.gov/about/initiatives/got_weather/.             One such resource you might find especially helpful is the Personal and Weather Risk Assessment Guide (http://go.usa.gov/7hj3). The guide will assist you in developing your own standardized procedures for accomplishing the dispatch and pilot in command responsibilities of your flight department (you) and with making better pre-flight and in-flight weather decisions. It contains several checklists that will assess your experience in certain scenarios (e.g., gusty landings, crosswinds, etc.) and help you determine a personal risk factor score before your flight.  New SAIB Issued on Heading Information Errors            According to a new Special Airworthiness Information Bulletin (SAIB) issued this week by the FAA, there continues to be a growing number of reported heading errors and anomalies in heading reference systems due to standard maintenance practices and the use of standard tools while maintaining these systems. The problem stems from the sensitive nature of these heading sensors which can be substantially affected by ferrous materials, including the improper use of magnetic tools (like magnetic screwdrivers) in close proximity.             The FAA recommends that you follow all manufacturer installation/maintenance instructions, warnings, and troubleshooting procedures per their instructions for continued airworthiness or maintenance manuals. A simple test for possible magnetic interference is to use a magnetic compass and slowly move around the area of the sensor looking for any deflections of the compass needle. Excessive needle movement can be evidence of ferrous material or sources of magnetic interference like flap motors or flight control system components.            For more information on how to identify sources of magnetic interference that might affect heading sensor operations, see the SAIB at: http://go.usa.gov/7hEH.    “Chill Out” with the New FAA Safety Briefing            The November/December 2014 issue of FAA Safety Briefing focuses on winter operations. Articles cover some of the exciting opportunities that the winter flying season offers as well as provide a review of several important cold weather safety strategies. Among those strategies are some reminders on how you can recognize and keep the adverse consequences of cold stress at bay. In her article “Chilled to the Bone,” author Sabrina Woods looks at how cold can affect both body andmind which can negatively affect your decision-making ability.             You can read the article here: http://1.usa.gov/FAA_ASB. Produced by the FAA Safety Briefing editors, http://www.faa.gov/news/safety_briefing/Address questions or comments to: SafetyBriefing@faa.gov. Follow us on Twitter @FAASafetyBrief or https://twitter.com/FAASafetyBrief
This notice is being sent to you because you selected "General Information" in your preferences on FAASafety.gov. If you wish to adjust your selections, log intohttps://www.faasafety.gov/Users/pub/preferences.aspx where you can update your preferences.
Invite a fellow pilot to the next WINGS Safety Seminar in your area.

FAASafety.gov | Email Preferences | Opt Out   Do not reply to this email as it is an unmonitored mailbox. Contact us for comments or questions.
Posted by Contact Information at 11/06/2014 06:13:00 PM No comments: