Could Your Airplane Be A PNC

An Aviation Rule Making Committee (ARC) issued a 346 page report to the FAA on how to streamline small airplane certification in ways that maintain and improve safety while cutting costs. In that report is the recommendation for a new certification category called Primary Non-Commercial (PNC).
An airplane in the PNC category could be maintained by its owner, and would not need to use FAA certified equipment or replacement parts. A PNC would be very much like a homebuilt in terms of maintenance and equipment requirements.
To qualify for PNC category an airplane or glider would need to have a standard production category airworthiness certificate, be at least 20 years old, not be turbine powered and be unpressurized. The airplane would need to have a current annual inspection with all ADs addressed. The airplane owner would apply for PNC which would be granted jointly to him and the airplane. The only physical changes required would be placards to announce to passengers that the airplane in in the PNC category.
Once the owner completes a yet to be created FAA approved maintenance course he could maintain his PNC airplane, add new equipment, and modify it. The only requirement is that the owner use aviation appropriate equipment and maintenance techniques and keep very complete records of all modifications and maintenance procedures.
Once each year the PNC would be required to have a condition inspection by a licensed A&P mechanic. This is different from the annual inspection required for standard category airplanes. An annual is intended to confirm that the airplane conforms in every respect to its type certificate. The condition inspection confirms only that the airplane is airworthy.
A PNC could be returned to standard category by going through an annual inspection to determine that every part of the airplane conforms to its type certificate, STCs and ADs. In other words, any non-certified equipment or modifications made to a PNC would need to be removed or brought into conformity for the airplane to return to standard category.
The PNC would actually operate in a dual certification category. The operating limitations of its standard certificate would still apply, but maintenance and modification procedures would not. A PNC could not be used for hire in any way, except the owner could pay a flight instructor to fly with him in the PNC.
The owner of a PNC could also make major modifications but that would put the airplane into a Phase 1 flight test program similar to newly built or highly modified homebuilts. For example, if a PNC owner dropped a 300 hp engine into his Skyhawk that would almost certainly require a Phase 1 flight test program. But if an owner installs non-certified avionics, for example, no additional approval would be required. Or he could install an improved restraint system, or better wheels and brakes and so on without needing approval. Many of the better and less costly equipment options that are now available for the homebuilt airplane could be installed in the PNC.
The ARC report on changing FAR 23 is 346 pages long, but there are still missing details of how the changes would exactly work. In one part of the report it recommends the PNC be limited to any fixed wing CAR 3/FAR 23 airplane that is not turbine powered or pressurized. In another section you can see a proposal that limits PNC to basic fixed gear singles with no more than four seats. Who can guess what a final rule may be.
In many respects I think PNC airplane owners will self-sort to basic airplanes, including classics and antiques. It makes sense to do your own maintenance on a basic airplane where construction methods and materials are common and systems are simple. To do your own maintenance on a high performance rectractable, for example, is more daunting, would demand more specific tools, and may risk your investment.
For example, a 20 year old A36 Bonanza is still worth a lot of money. If an owner converted the Bonanza to PNC, made many non-certified changes, and then wants to sell it what will it be worth? Less than a standard A36 I would guess because a new owner may not agree with the changes the PNC owner made. The ARC is very upfront about the airplane value issue and they believe that risk of resale value will restrain really big modifications to many airplanes.
So what are the chances we will see the PNC category become a rule. It’s hard to say. Even though the PNC was in the final ARC report it did not make it to a final version that Congress requires the FAA to adopt. The fact that the committee recommends it is powerful, but not a done deal.
Most of the recommendations in the report deal with the process of certification, and how a manufacturer can demonstrate conformity with less variability and uncertainty. Those are worthy goals, but not many are concrete actions. Creation of the PNC category is a very specific recommendation, not a process change.
Yes, the devil is still in the many details of a PNC that may emerge from the FAR 23 rewrite. We can keep the pressure on FAA to include the PNC even though it is not yet under the Congressional mandate.
I think the PNC fits in perfectly with the growing demand for changes in the Third Class medical. When flying is totally personal and private it should be lightly regulated. There is no reason that an airplane built in a factory can’t be maintained and updated by a trained owner just as owners of experimental airplanes have done for decades.

This entry was posted in Mac Clellan's Left Seat Blog. Bookmark the permalink.
← Aspen and Bendix/King Bend the Value Curve
Posted by Contact Information at 3/28/2014 10:03:00 AM No comments:

RANGR FDL-978-XVR
Enlarge Photo
FreeFlight recently got the green light from the FAA for an approved model list (AML) supplemental type certificate (STC) for the RANGR FDL-978-XVR ADS-B In and Out universal access transceiver (UAT). The overarching AML STC covers a wide range of aircraft, including rotorcraft. FreeFlight says this AML STC is the first for a 978 MHz UAT that can be installed in rotorcraft.
The RANGR FDL-978-SVR UAT, which also includes WAAS/GPS, provides the ADS-B Out capability required under the ADS-B mandate, which will go into effect in 2020, when incorporated with a Mode A, C or S transponder. The UAT also includes ADS-B In functions including TIS-B traffic and FIS-B weather data. Traffic and weather can also be displayed on an iPad through a Wi-Fi module, which can be added for $350.
Each aircraft type must complete an approval process in order to be added to the approved list for the STC, a one-time process that FreeFlight is covering free of charge. Once an aircraft type is on the list, the UAT can be readily installed into others.
FreeFlight is offering a promotion to encourage operators to add ADS-B capabilities now rather than to wait until the 2020 mandate. The complete system, including the Wi-Fi module, can be purchased for $3,995 until the end of the year. The regular price for the system, not including the Wi-Fi is $5,495.
Read more at http://www.flyingmag.com/avionics-gear/instrumentaccessories/freeflight-certifies-ads-b-uat-unit#jGW4gsAptuyt92ao.99
Posted by Contact Information at 3/25/2014 07:10:00 PM No comments:

A reminder of the fly out for lunch tomorrow.  Weather is supposed to be sunny and clear skies both here and the destination tomorrow after some burnoff of early morning fog.   Best thing you can do for your airplane engine is take it for a flight every week.  So come join us tomorrow as wefly to KFQD.   Target your arrival at around 11:30.  Its 92 nm.   So plan totake off between 10:30 and 11:00 depending on the speed of your bird.  Look forward to seeing you there.
Bo has indicated there is an EAA chapter in Georgia having a fish fry as well tomorrow.   It’s a 2500’ grass strip which eliminates that as an option for me.  I deleted Bo’s note but the field is south of Augusta airspace I believe.  I think its GA 51.   See Bo if you are interested.  The important thing is to just go have some fun tomorrow. 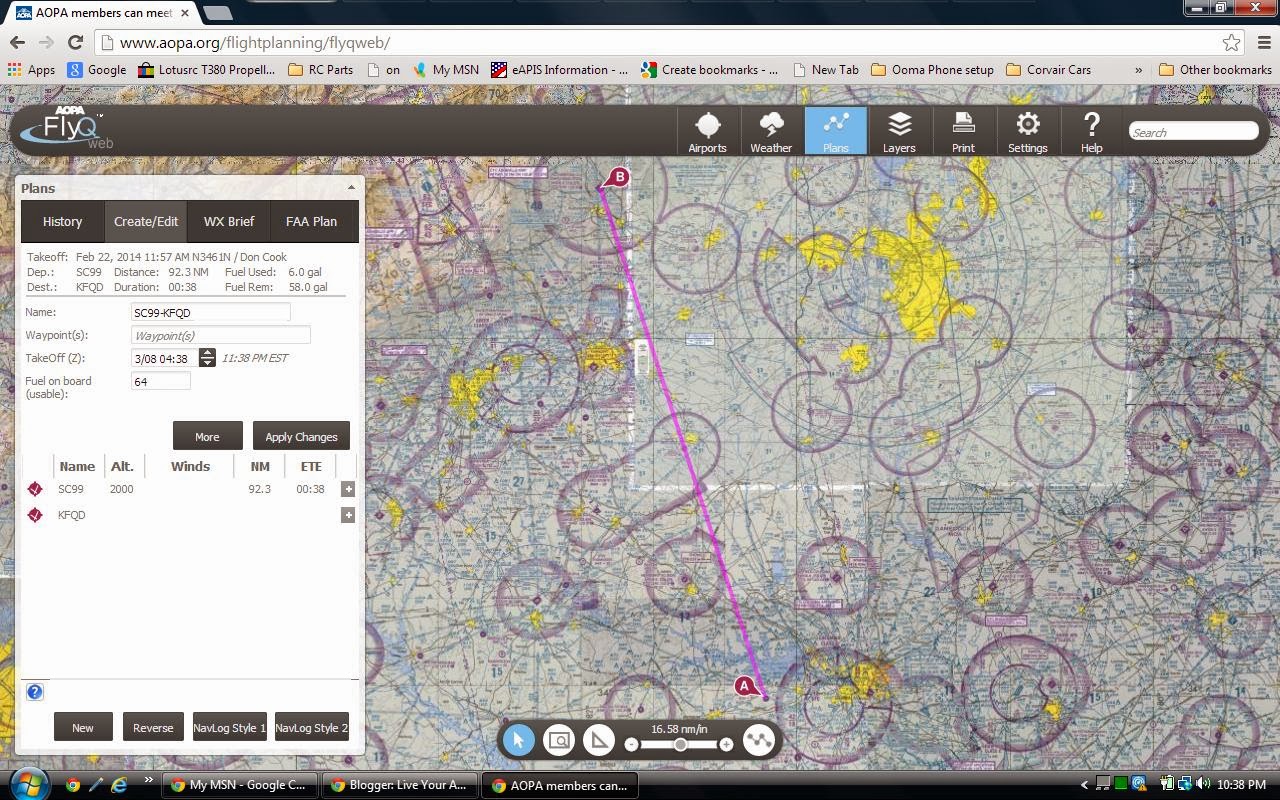 Select Number:
SO1354649
Description:
Join us for a Complimentary LUNCH at 11:30 AM!
12:00 - 1:30 pm - AOPA Seminar: Close Calls - Lessons Learned
1:45 - 3:00 pm - AOPA Seminar: Accident Case Study: Live
3:30 - 5:00 pm - AOPA Seminar: Weather Challenge
To view further details and registration information for this seminar, click here.
The sponsor for this seminar is: SC Flight Sandards Disrict Office
The FAA Safety Team (FAASTeam) is committed to providing equal access to this meeting/event for all participants. If you need alternative formats or services because of a disability, please communicate your request as soon as possible with the person in the 'Contact Information' area of the meeting/event notice. Note that two weeks is usually required to arrange services.
The following credit(s) are available for the WINGS/AMT Programs:
n/a Click here to view the WINGS help pageInvite a fellow pilot to the next WINGS Safety Seminar in your area.

FAASafety.gov | Email Preferences | Opt Out   Do not reply to this email as it is an unmonitored mailbox. Contact us for comments or questions.
Posted by Contact Information at 3/07/2014 10:34:00 PM No comments: 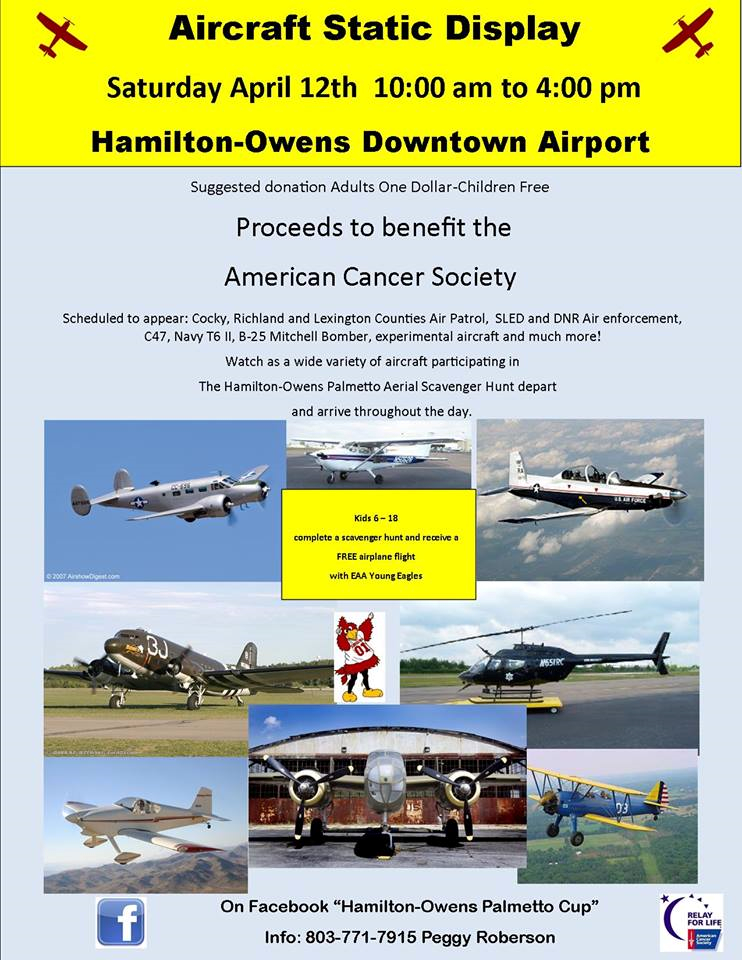 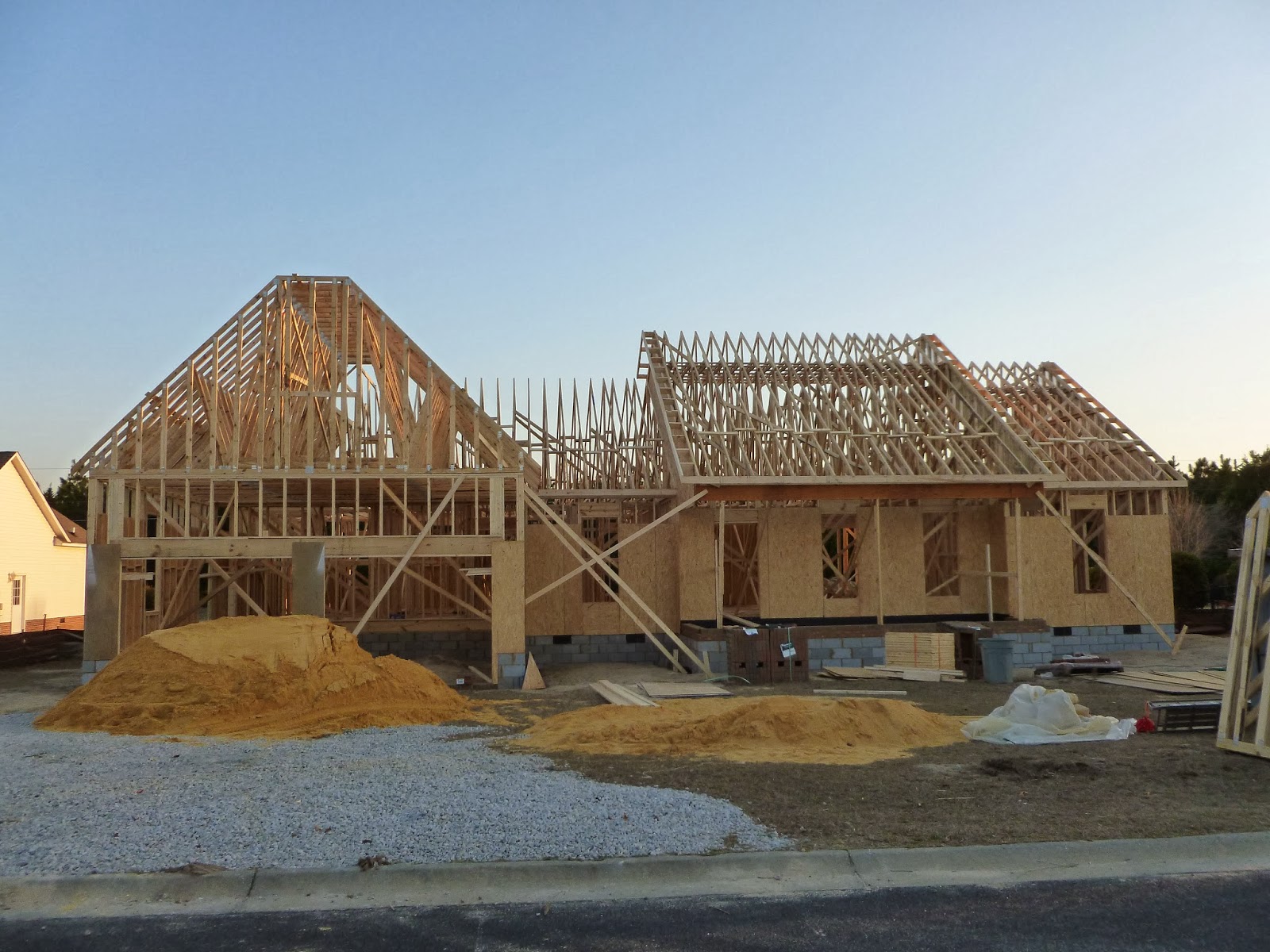 Friday the trusses went up. 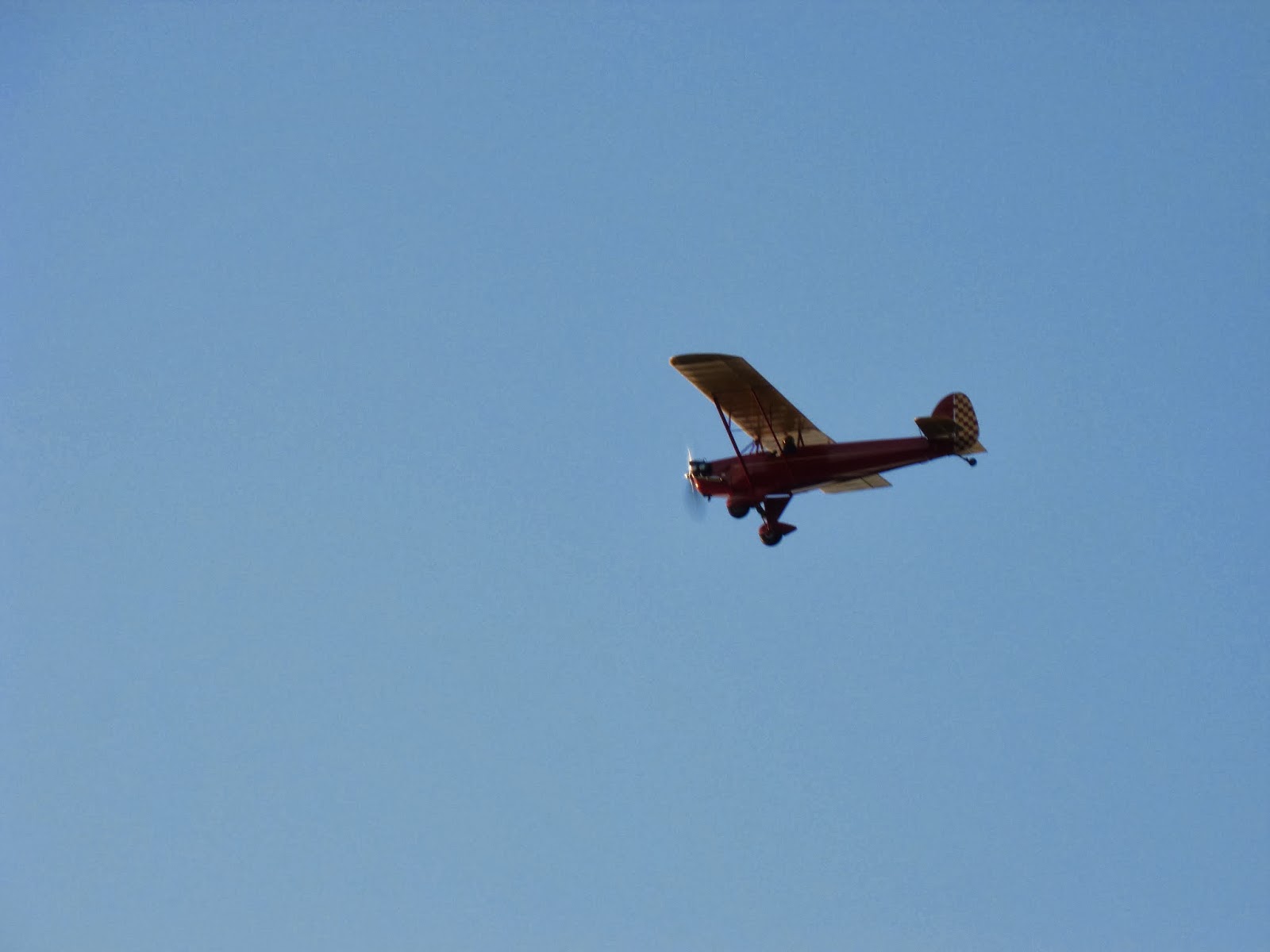 Of course, we need a airplane shot. 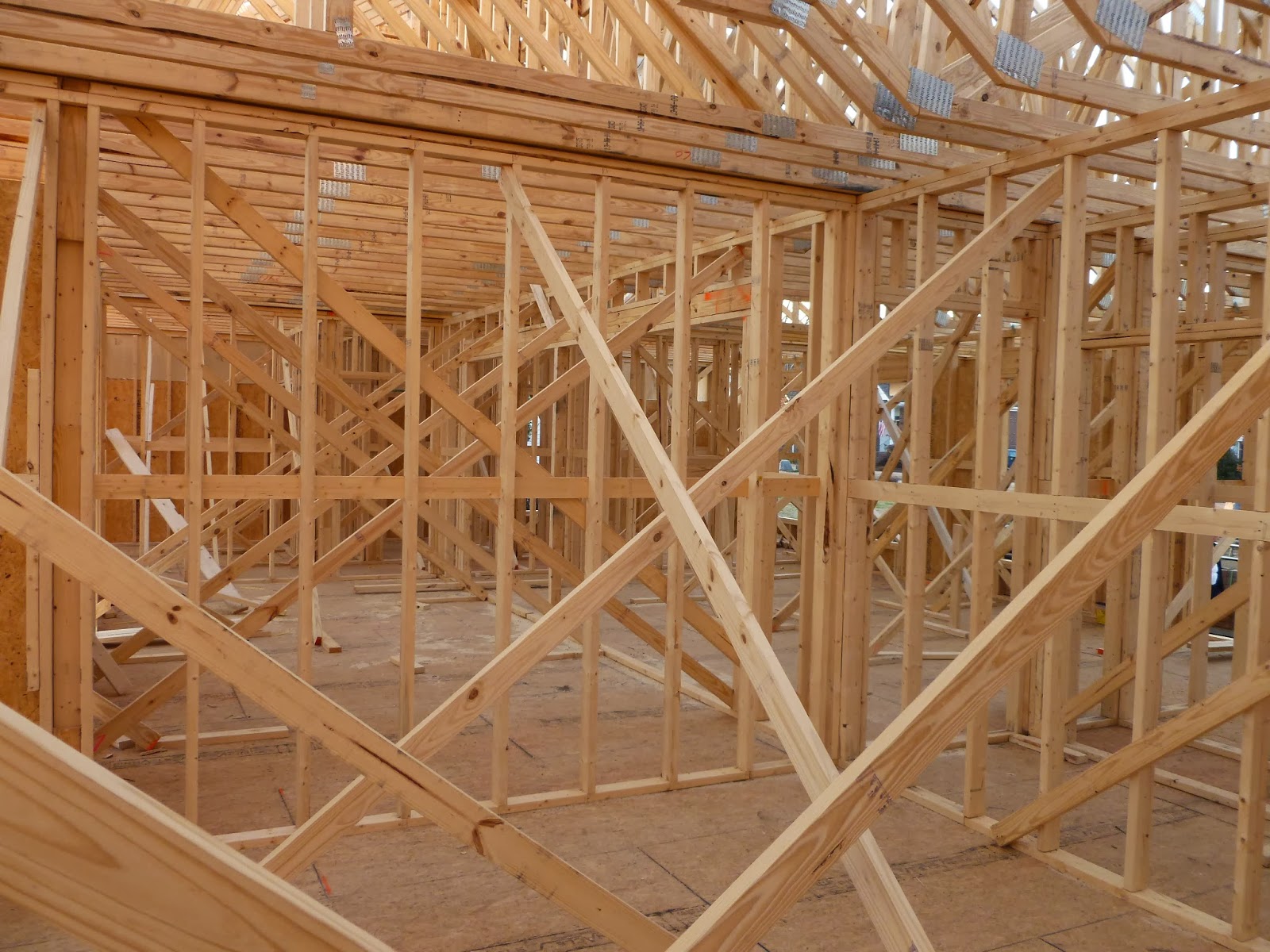