Since Mr. J. shares a story so will I.  Unlike Ken however, my personal experiences were more intimately involved with the only airplane I am embarrassed to say I’ve flown…the venerable, hypercritical laminar flow winged, later variant DC-9, the mid 1970’s technology MD-80.  Same airframe, just a more critical and much higher loaded wing.  The higher wing loading insured even more violent stall behavior.  My 6 years 3 months and 8 days on that POS at Continental, was by far the most challenging in so far as maintaining a determination to continue to work as a pilot.  I held the mission in disdain and to this day jokingly ask, “You know what I miss about that airplane?”  after a bit of comic delay, I offer “Absolutely nothing”.

Our fleet had -80s built for 7 different airline configurations!  Keeping differences straight was a full time task for the training department folks, not to mention the line pilots.  The airline had chosen to relegate the old hulks primarily to shuttle flying (DCA ATL and BOS from EWR) as we were taking delivery of better, newer, all Boeing equipment.  This "mission evolvement" happened shortly after I got comfortable with the tasks required of me and of course got myself locked into a 3 year training freeze...  Gone were the nice 4 day, west coast and Mexican riviera trips that lured me to bid it.  5 and 7 leg days, populated with endless ATC delays became my norm.  Occasionally I would see a Florida trip.  Being junior as a First Officer, I got to fly the garbage trips nobody else wanted (6 AM departures every Saturday morning, long sits between flight segments, lower productivity) with the Captains nobody else wanted to fly with, always on holidays and weekends, in weather other pilots had called in sick because of.

As our fleet was improving, the -80 became the lowest rung on the technology ladder too.  Captains who had a hard time with mastery of the fully automated flight guidance equipped flight decks of the newer 737-300s, deemed the terminator by those who couldn’t check out on it, were often offered a 2nd chance to return to the -9/-80 community, rather than the unemployment line.  Watching that demographic flying the first generation, digital flight guidance system, was often like watching a High School wrestling match.  Yep, Good ol First Officer XXXXXX was out there with these bozos on a regular basis.  If a guy had nervous tick, or particularly poor personal hygiene, or a human resources folder as thick as the NYNEX yellow pages, perhaps they had been protected from discipline(s) by Frank Lornezo, because of their choice to break ALPA’s 1983 strike, in spite of a long documented history of sexually harassing flight attendants, or having an arrest record as an arsonist, tax cheat or pedophile, you can bet I was jerking gear for him/her on a weekend.

But I digress, back to the airplanes miserable stall characteristics…

In stone were the weight limits for high altitude and temperature.  YOU COULDN”T DO IT (climb to that next Flight Level above  certain weight, in those days it was 4000’ between same direction flight levels) if you weighed more than the numbers.  The big ones were 132,000 pounds or less to go to FL350 and 117k for FL370.  Yet it was just too tempting for some.  That was often enough to get you on top of the biggest weather, so the decision was often based in an unrealistic fear of deviating or an outright fear of the weather itself.  If you went too high, you’d stall or vacillate between mach tuck and stall with no real assurance which phenomenon you were currently experiencing.  Everybody knew it, but yet several times a year one of our finest would try anyhow…the video speaks for itself as to what the expected results are, just add flight attendants in the aisle with beverage carts and little old ladies standing in line for the lav.   Been there done that, refused to defend those that did it and often offered the chance of a ramp side fist fight, assuming we survived the stupidity, if a guy had that “look”, like he was going to disregard the hard fast limits of that airplane’s stall character.

Alf In The Wake Over VINAX

Alf In The Wake Over VINAX from AA Productions on Vimeo. 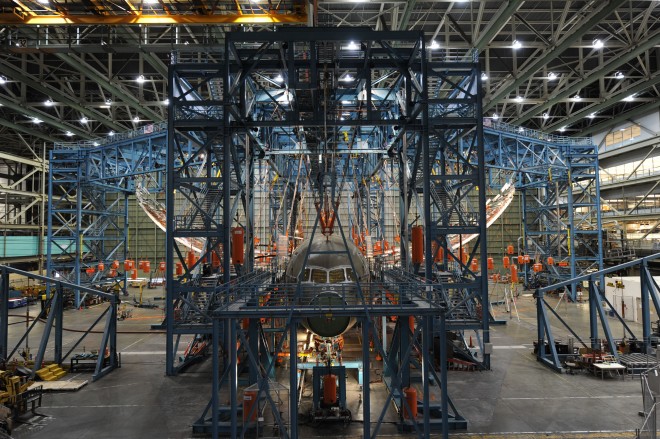 BOEING HAS COMPLETED one of the more spectacular tests of the 787 Dreamliner program. The airplane maker completed the “ultimate-load wing-up bending test” on Sunday using airframe ZY997, the test aircraft that is basically built to be tortured on the ground and never fly.
During the test, the wings on the 787 were flexed upward “approximately 25 feet” which equates to 150 percent of the most extreme forces the airplane is ever expected to encounter during normal operation. The test is used to demonstrate a safety margin for the design and is part of the certification process to show the airplane can withstand extreme forces.
Ultimate wing load testing is standard procedure for any new airplane design and has been done on aircraft large and small almost since the beginning of aviation. Often simple sandbags are placed on the wing of an aircraft to represent the maximum forces needed to be tested. Boeing and other large plane makers use elaborate testing structures (pictured above) that flex the wings to apply the necessary forces. In the past, Boeing has flexed the wing beyond the required 150 percent, and more than once the company has flexed the wings of a new design to the failure point. The most recent example was in 1995 with the 777.
Back in 2008, Boeing posted video of an isolated 50 foot section of the 787 wing being flexed to the point of failureduring earlier testing.
It had long been wondered if Boeing would flex the composite wings of the 787 to failure, but the company said they only went to 150 percent, and no further. An issue with the wing where it joins with the fuselage led to a major setback for the 787 program last year. The problem was fixed and a Boeing statement regarding Sunday’s test said the initial results from the test are positive and more analysis is being done.
For a larger version of the photo above, click here.
Photo: Boeing
Go Back to Top. Skip To: Start of Article.
Posted by Contact Information at 2/25/2017 01:10:00 PM No comments: