K-Clubbers,
We may have set a record this morning!
21 of 28 of us in attendance. 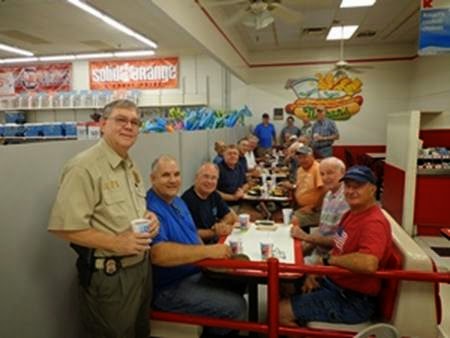 Send comments on or before August 25, 2014, in accordance with Docket No. FAA-2013-0316 found here:https://www.federalregister.gov/articles/2014/06/25/2014-14791/aviation-rulemaking-advisory-committee-airman-certification-system-working-group


Arlington Fly-in Coming Soon
In less than two weeks one of the largest GA events of the year kicks off at the Arlington Municipal Airport in Arlington, Washington, where more than 1,000 aircraft will congregate. Running between July 10-12, 2014, the Arlington Fly-In will play host to almost every kind of GA craft from powered parachutes to classic warbirds. The Fly-In is also a great place to learn. In addition to the many workshops the FAASTeam is also providing free safety seminars like Minard Thompson’s seminar on returning to flight after a period of inactivity.

Do You Need to See a Specialist?
Editor Sabrina Woods provides a concise guide on who should be fixing your plane in her article “The ‘Doctor’ is In” on page 18 of the latest issue of FAA Safety Briefing. Woods offers a prescription as to who should be doing what on your aircraft and what certification those providers should hold. The issue is available at: http://www.faa.gov/news/safety_briefing/


Follow us on Twitter @FAASafetyBrief or https://twitter.com/FAASafetyBrief.
This notice is being sent to you because you selected "General Information" in your preferences on FAASafety.gov. If you wish to adjust your selections, log into https://www.faasafety.gov/Users/pub/preferences.aspx where you can update your preferences.
Invite a fellow pilot to the next WINGS Safety Seminar in your area.

FAASafety.gov | Email Preferences | Opt Out   Do not reply to this email as it is an unmonitored mailbox. Contact us for comments or questions.
Posted by Contact Information at 6/27/2014 01:11:00 AM No comments:

©George A. Kounis
Enlarge Photo
Pilots at the Recreational Aviation Foundation have reason to celebrate after achieving two big wins

during the past couple of weeks. California and South Carolina have both adopted legislative language that provides greater opportunities for backcountry flying.
The Recreational Use Statute in the two states has been amended to include aviation activities, providing landowners protection from liability when recreational pilots land on their properties. As a result, landowners will likely be more welcoming to airplanes flying into airstrips on their land.
As the third largest state in the union, California was a particularly big win for RAF. "California is such an important aviation state and with the passage of the RUS this is not only an important day for California but a very big day for aviation," said RAF's president John McKenna.
Twenty-four states have changed their RUS to include aviation activities as a result of the tireless work of RAF members, and there are six states in the process of making amendments.

Read more at http://www.flyingmag.com/news/recreational-pilots-gain-rights-california-and-south-carolina#KU9QVd7xufW1Ixhq.99
Posted by Contact Information at 6/26/2014 06:31:00 PM No comments:

I have represented AOPA in South Carolina for 30 years and have never ceased to be amazed at the general aviation energy in the Palmetto State. This past weekend I had the pleasure of enjoying an aviation tradition that I have somehow missed until now. It’s the incredible “South Carolina Breakfast Club”, a real southern breakfast, with everything, including grits, biscuits and gravy, great fellowship and flying! Every other Sunday since 1938 (that’s 76 years) pilots & aviation enthusiasts in and near South Carolina have met for breakfast. There are no dues and no meeting requirements! Breakfast costs about $6 – $10 a plate – its ready about 9AM and there is always plenty to eat. Fly in or drive to the airport, have a great breakfast and talk flying until your hearts content! Pilots or non-pilots it doesn’t matter… everyone’s welcomed!
The South Carolina Breakfast Club is led by President Gerald Ballard who has been visiting airports around South Carolina and a few surrounding states every other Sunday since 1938. He only missed events during World War II when fuel was not available. The SCBC has no dues — you join by attending your first one and the only rule is to “fly safe.” Gerald wasn’t at the one at Rock Hill (UZA) this past Sunday but Stoney Truitt made me feel right at home real quick. He even made me a

“Life Member”; gave me a patch to prove it as well as a nice gold SCBC pin and last year’s 75th anniversary patch. I suspect that everybody that attends for their first time gets the same but it was only me on Sunday. I’ll have them sewn on to my vest along with all that other stuff that proves I’m a real pilot.
Yes, there a lot of fly-in breakfasts going on in the South but this one is exceptional. It’s an established tradition, all year round, on Sunday mornings, every other week and it moves all over the state. Valerie Anderson is the current “historian”. She takes lots of pictures during each event, turns them into a nice video that is accessible on-line. You can check it out further at the SCBC website: www.flyscbc.com . The annual schedule of locations is right there. You ought to try and get to of these breakfasts sometime soon.
I moved on to Spartanburg after the breakfast club on Sunday to meet with theSpartanburg Pilot’s Association on Monday evening at Spartanburg’s Downtown Airport (SPA), the oldest airport in South Carolina. The SPA now boasts more than 70 members and there were two new ones who had just soloed recently there too. My gracious host was association President, Terry Connorton and I think everyone there was an AOPA member. Thanks! The Spartanburg Pilots Association was organized about two and one-half years ago and is clearly prospering. I was impressed by their busy activities schedule… lots of events to attend around the region and fly-outs to other airports. Terry said they would plan to arrange flying to our AOPA Southern Region Fly-In at St. Simons Island on November 8th. This local pilots association is a perfect example of one way we can make flying fun again. It establishes a nucleus where pilots can gather and feel welcomed to be around people with the same interest. The activities add even more enjoyment. And what a great place to bring friends to introduce them to flying! I began this blog by mentioning the extraordinary general aviation energy in South Carolina. These two examples are just the beginning. There is so much more: The Triple Tree Fly-In in September 3-7, 2014 – www.tripletreeaerodrome.com ; The Southeast Aviation Expo at Greenville Downtown Airport – September 26-27, 2014 – www.scaaonline.com/southeast-aviation-expo , the South Carolina Aviation Association’s Annual Conference, Feb. 11-13, 2015 – www.scaaonline.com/sample-page/scaa-annual-conference and more I am sure.
We could all learn something from the GA activities and energy in South Carolina. Fly over there sometime soon and enjoy some real Southern Hospitality.
Posted by Contact Information at 6/23/2014 12:01:00 AM No comments:

THE FIRST AIR FORCE ONE

This looks like it is going to be a fun event to attend.  Mark it down on your calendar right now.  This coming Saturday.
Posted by Contact Information at 6/16/2014 02:31:00 PM No comments:


June 9, 2014
By Benét J. Wilson
During the summer, pilots need to pay special attention to the season's unique weather changes that can affect flying. Just in time for the Air Safety Institute’s Storm Week, here’s a look at five weather apps. These are not endorsements of any app.
WunderMap (free in iTunes and Google Play)—This smartphone and tablet app, created by Weather Underground, offers access to conditions and forecasts from a network of 33,000 neighborhood weather stations. Users can track storms with animated radar and satellite images, get the most crucial information for hurricanes and fires, search for hyperlocal forecasts from personal weather stations, and track severe weather alerts.
FlightPath (free in the Windows Store)—Users of this smartphone app can get METARs, TAFs, airmets, sigmets, pilot reports, airport notams, and aviation weather maps. The app also allows users to pin airports to the home screen and get updated aviation weather on the smartphone’s live tile.
Turbulate (free in iTunes)— iPhone and iPad owners can report turbulence and also see where it’s being reported around the world. Users can zoom in on specific areas and touch and hold a map to submit a turbulence report.
WeatherGeek Pro 2 ($2.99 in iTunes)—The creators of this iPhone/iPad app say users can view the same numerical weather model data meteorologists use to develop their forecasts. Users have access to weather maps from the Global Forecast System, North American Mesoscale Forecast System, Weather Research and Forecasting Model, Short Range Ensemble Forecast, and Rapid Update Cycle. Features include numerical weather model maps for the continental United States, Canada, and Alaska; the ability to view multiple products such as precipitation forecasts and various thickness maps; simulated radar; and sharing maps on Facebook, Twitter, and email.
FlightBriefer Aviation Weather ($0.99 in Google Play)—This smartphone app gives users quick and easy access to aviation weather information including notams, TAFs, pilot reports, airmet and sigmet chart images, winds aloft forecast images, and color and black-and-white satellite images for all ICAO regions.
Please continue to send along any favorite pilot/aviation apps, especially those on Google Play and Windows, here. The complete list of apps I’ve highlighted since October 2012 is in AOPA’s online archive.
Apps help pilots track weather, storms - AOPA
Posted by Contact Information at 6/12/2014 07:53:00 PM No comments:

Come on out and have some fun, and save .50 a gallon on fuel.