The Runway Cafe is now ready for take off at the Greenville Downtown Airport (GMU) in South Carolina. ‘The cafe officially opens Sept. 1, according to Joe Frasher, airport director. “A short quiet opening has been taking place for the last couple of weeks, just so all systems could be checked,” he added. 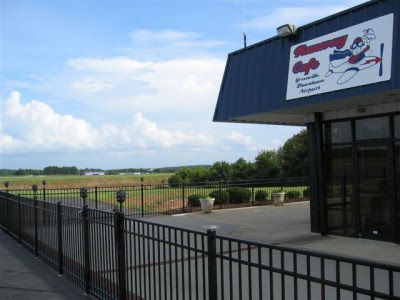 A variety of events are planned for the public grand opening, added Lem Winesett, part owner of the Runway Cafe.

“Also if you stop by before Sept. 7 you can enter to win a Discovery Airplane Flight Lesson from Greenville Jet Center, a round of golf for four at CrossWinds Golf Club, a GMU T-shirt or baseball cap, all with no purchase necessary,” Winesett added.

“The Runway Cafe serves a variety of food, as well as beer and wine. The aviation themed venue is family friendly, affordable and features a main dining area, outside seating, room for private groups and a large hangar for special events,” said Mike Bliss, managing partner of the Runway Cafe.

Pilots can “park” their planes right in front of the restaurant, airport officials note.

Beside the restaurant is some land where a park is planned. “We are looking for a park sponsor who might like the park named after them or their company. We envision a set up similar to the one at the Peachtree Dekalb Airport (PDK) in Atlanta. It has picnic tables, a viewing stand and playground equipment. We would also love to have a walking exercise path around the space. We have had several park designs made and are just waiting for our future park sponsor to help make the final choice,” said Lara Kaufmann, public relations director for GMU.

The Runway Cafe and proposed park site are located at 21 Airport Road Extension in Greenville, South Carolina. To get there by airplane: After landing at GMU, request taxi instructions to the restaurant on the southwest apron. To get there by land: From Laurens Road, turn by the post office onto Airport Road and follow the road until it dead ends, the site will be in front of you.

GMU is the busiest general aviation airport in South Carolina and is a self-sufficient entity with financial strength that doesn’t rely on local taxpayers for funding. The airport is home to more than 25 aviation-related businesses creating 453 jobs that annually contribute more than $35.2 million to the Upstate economy.